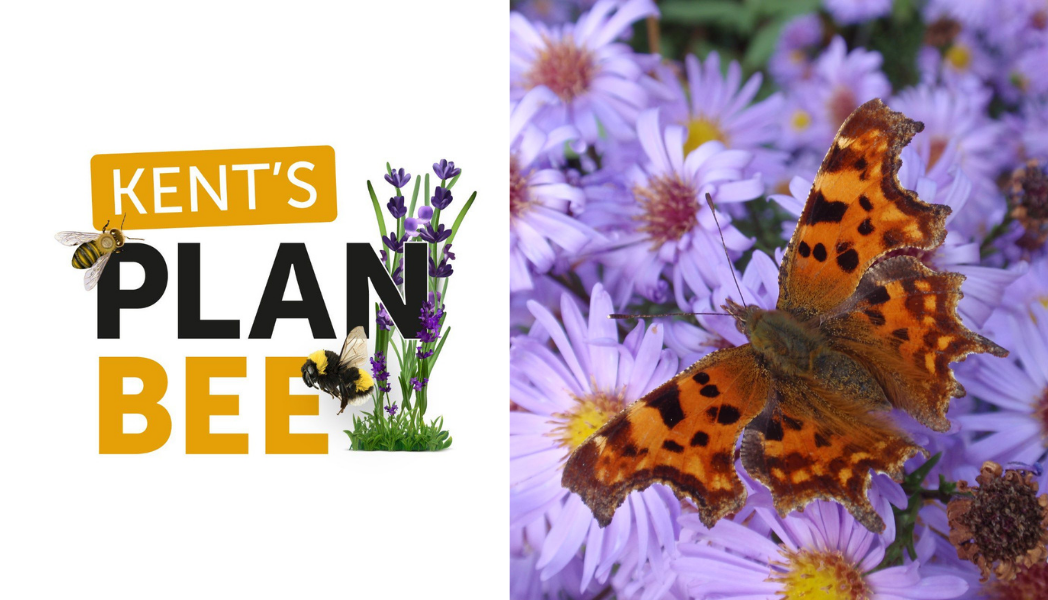 Earlier in July and August, the Kent’s Plan Bee FaceBook page featured a different species of butterfly each day, as a way to promote the national Big Butterfly Count. Although this national survey has now finished for 2021, there is still time to look for and record some of Kent’s beautiful and important pollinating butterflies

Here are a few butterfly species to spot, and the habitats or landscapes to look for them. Why not share a photo of your butterfly spots on the Kent’s Plan Bee Facebook page

In your garden, in churchyards, local parks or open countryside, where there is a mix of flowering plants, grassland, hedgerows and trees

Suggested sites to spot butterflies in parks and open countryside:

With distinctive, scallop-edged wings, which help camouflage overwintering adults when closed, it is named after the small, white ‘comma’ mark on its underside. Its favoured caterpillar foodplant is hop, traditionally grown widely throughout Kent, giving rise to a local Kentish name of ‘hop-cat’. Stinging nettle is also an invaluable caterpillar foodplant, for the Comma and other beautiful butterflies such as the Peacock – so check stands of stinging nettle for signs of caterpillar action.

With striking orangey-brown wings and distinctive double-white eyespots on its upper fore- and hindwings, to distinguish it from Meadow Brown, it is also known as Hedge Brown.  The eggs are laid on long grasses next to hedgerows and scrub, and caterpillars feed and overwinter on grasses taking over 8 months before pupating.  Adult Gatekeepers have a very short proboscis (feeding tube) so they nectar on simple, open flowers such as bramble, ragworts and common fleabane.

Has two broods each year, the spring caterpillars feeding on holly, and the second brood in late July to September feed mainly on ivy flowers. The bright blue adults are commonly seen in areas of shrubs and bushes, and they wander freely, flying high above hedgerows and trees. Have a good look at mature ivy in hedgerows where flowers are developing – a precious forage plant in late summer for many pollinating insects.

A soft golden-yellow migratory butterfly, with a large white spot ringed in red on the hindwing to distinguish it from the more common bright yellow Brimstone. On good years, mass arrivals from the southern Europe create a ‘Clouded-Yellow year’ – maybe it will be 2021?  Look for these beauties in any area with lots of flowering plants – gardens, parks, meadows and farmed countryside especially where clovers and other members of the pea family (such as vetches and bird’s-foot-trefoil) are abundant.

In countryside and coastal grasslands

Look for the Kent’s grassland butterflies where grasses have been left to grow longer, with different flowering plants available – especially on open grassland sites on the Kent Downs, along coastal grassland or sunny meadows.

Stockbury between Maidstone and Sittingbourne.

Milky blue males, and chocolate brown females, this delicate butterfly is a specialist of grassland sites on chalk downland and the Kent coast.  Caterpillars of Chalkhill blue produce sugary honeydew which are ‘milked’ by ants, the ants in turn protect the caterpillars and pupae from predators. The adults have one brood mainly in August, they nectar on knapweeds, thistles and scabious species although the eggs are laid and caterpillars feed on horseshoe vetch. Adult males can be seen sometimes drinking from animal dung, a habit of several butterfly species, to obtain moisture and minerals.

These striking, two-tone butterflies are frequently seen basked in high summer, with a preference for purple flowers such as thistles, wild marjoram, knapweeds and scabious plants. Its caterpillars feed on different types of grasses, and the butterfly is associated with taller, unimproved grassland where a range of flowering plants are present.

There are several species of Skippers, and they can be mistaken for day-flying moths with soft-brown coloured wings that are held at different angles when at rest. Large Skippers can be distinguished by ‘hooks’ at the end of their antennae, if you can get close enough. Male large Skippers are very territorial and will return to the same grassy perch if disturbed.  Their preferred habitat is taller, uncut grassland, feeding on the flowering plants such as knapweed and thistles, and the caterpillars feed on a range of grass species.

Kent is one of the most wooded parts of the UK, with extensive areas of mixed woods with large old trees, coppiced clearings, and flowery woodland rides. In the heat of summer, woodland rides are perfect places to watch for some of Kent’s beautiful butterflies.

The dappled brown upper wings with creamy yellow patches and eyespots, help to provide camouflage in the dappled shade of woodlands.  Males will perch or patrol sunny woodland patches, spiralling into flight defensively against intruders, whilst seeking females.  Watch the male return to the same perch repeatedly in the same pool of sunlight.  Caterpillars feed on grasses, and the adults feed on honeydew high in the tree, although they adults nectar on flowers early in the year.

These large, eye-catching butterflies are a delight to see fluttering through woodland in high summer. A magnificent butterfly with golden-bronze pointed upper wings and green-washed and silver-streaked underside, a male butterfly will swoop acrobatically around a female during courtship.  Eggs are laid on tree bark and crevices from late July to September, the caterpillars then drop to the woodland floor to feed on violet species. Adults nectar on woodland flowers such as bramble.

A butterfly of oak woodlands, you may need binoculars to spot this beauty, as it spends much of its time in the woodland canopy. Look for ‘silver speaks’ flitting in the gaps between the treetops. With purple upper wings, and pale grey-blue underside and an orange eyespot near the wing-tail, the adults feed largely on honeydew high in the trees. In long, hot, dry summers they occasionally come down from the canopy to feed on bramble, hogweed and other woodland flowers. The caterpillars feed on the buds of oak trees.

All Photo credits: Rosie Bleet and Hannah Simmons all photos in the order as written above. 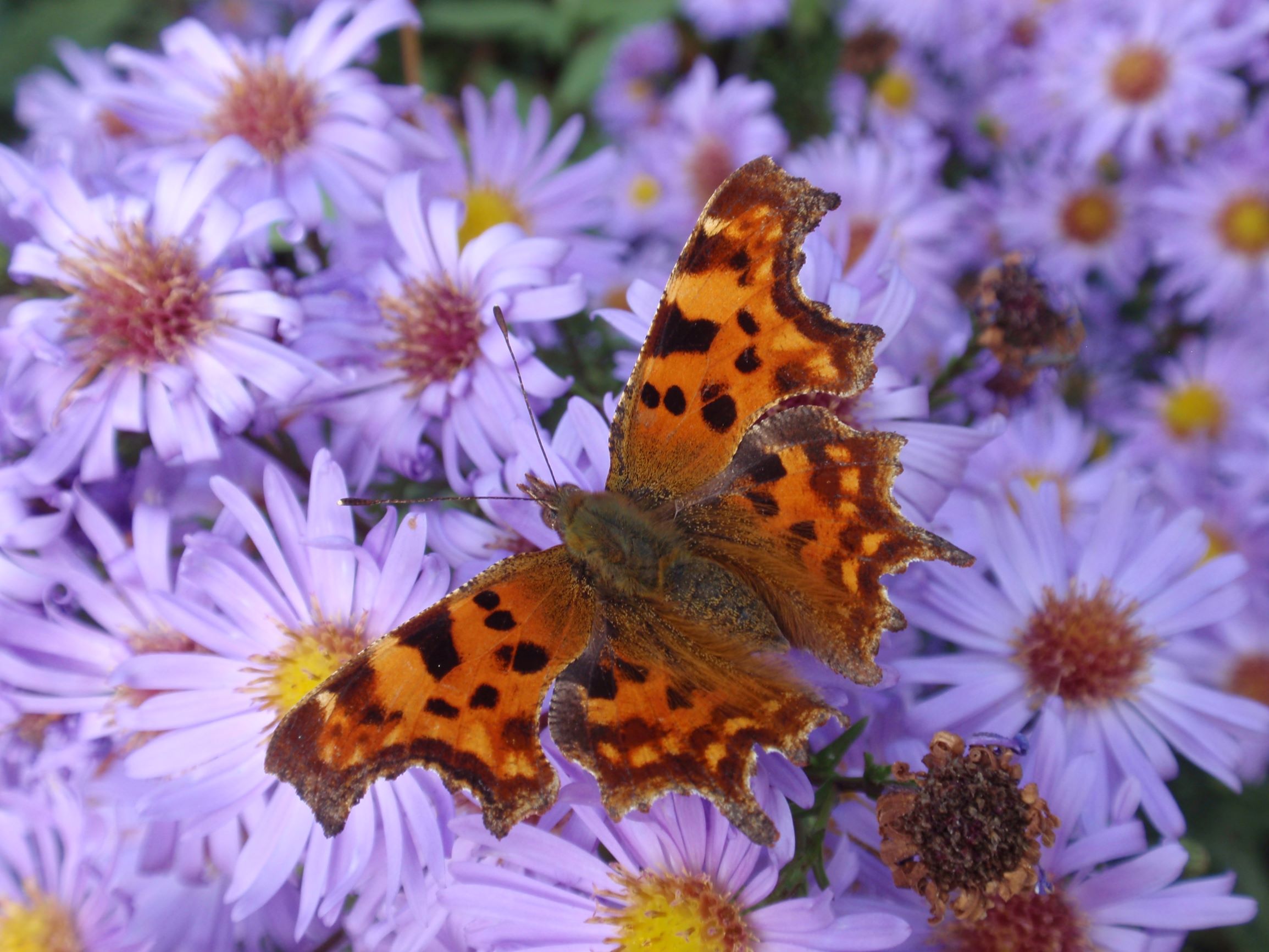 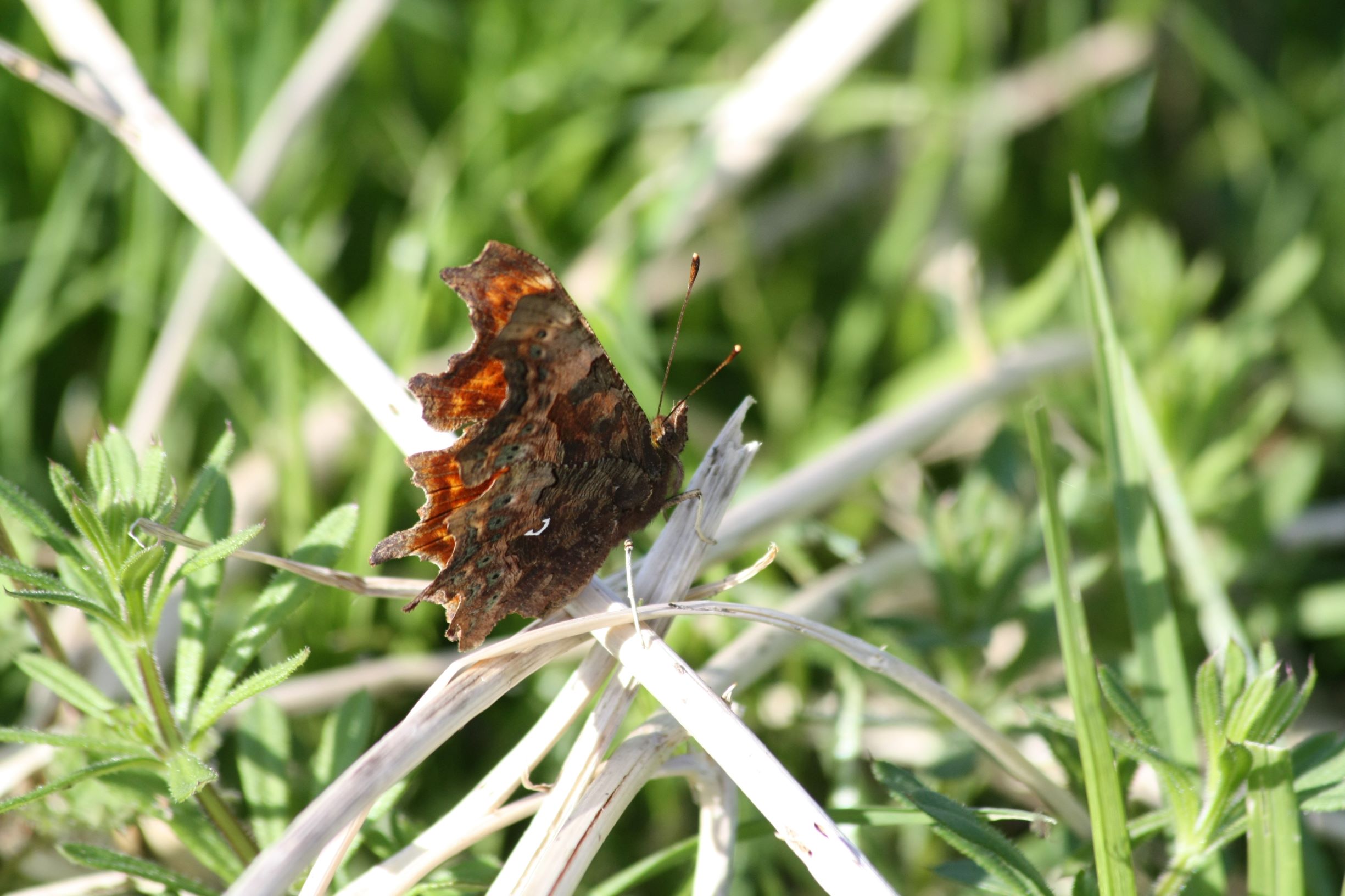 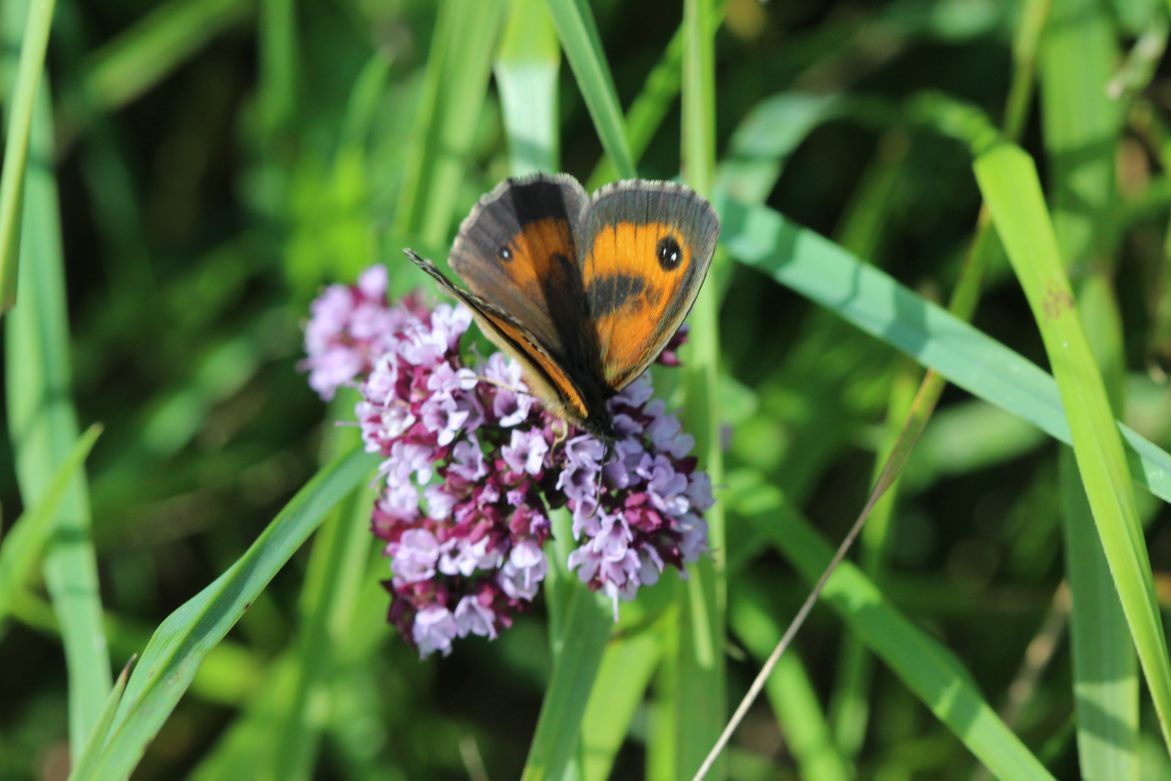 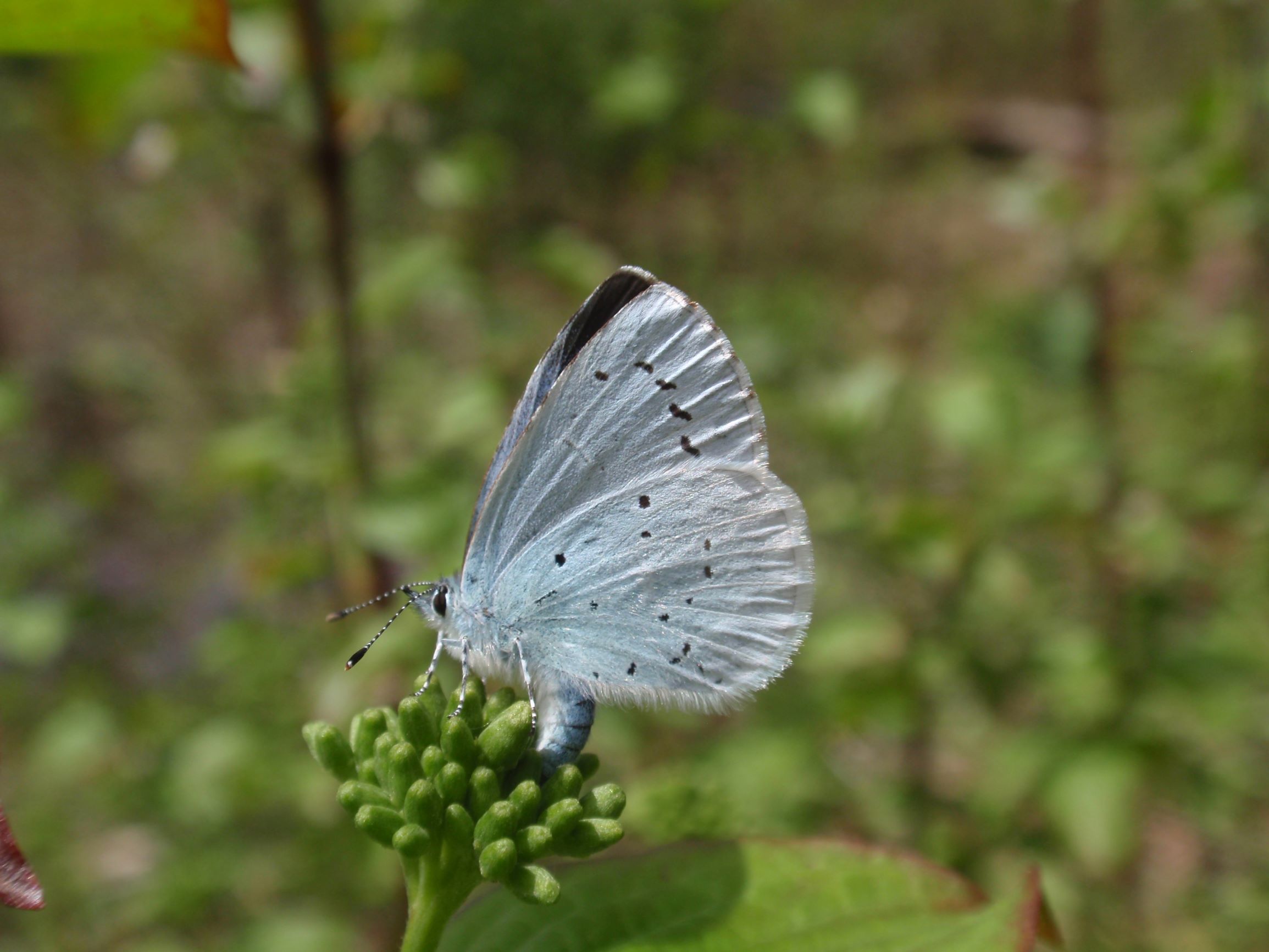 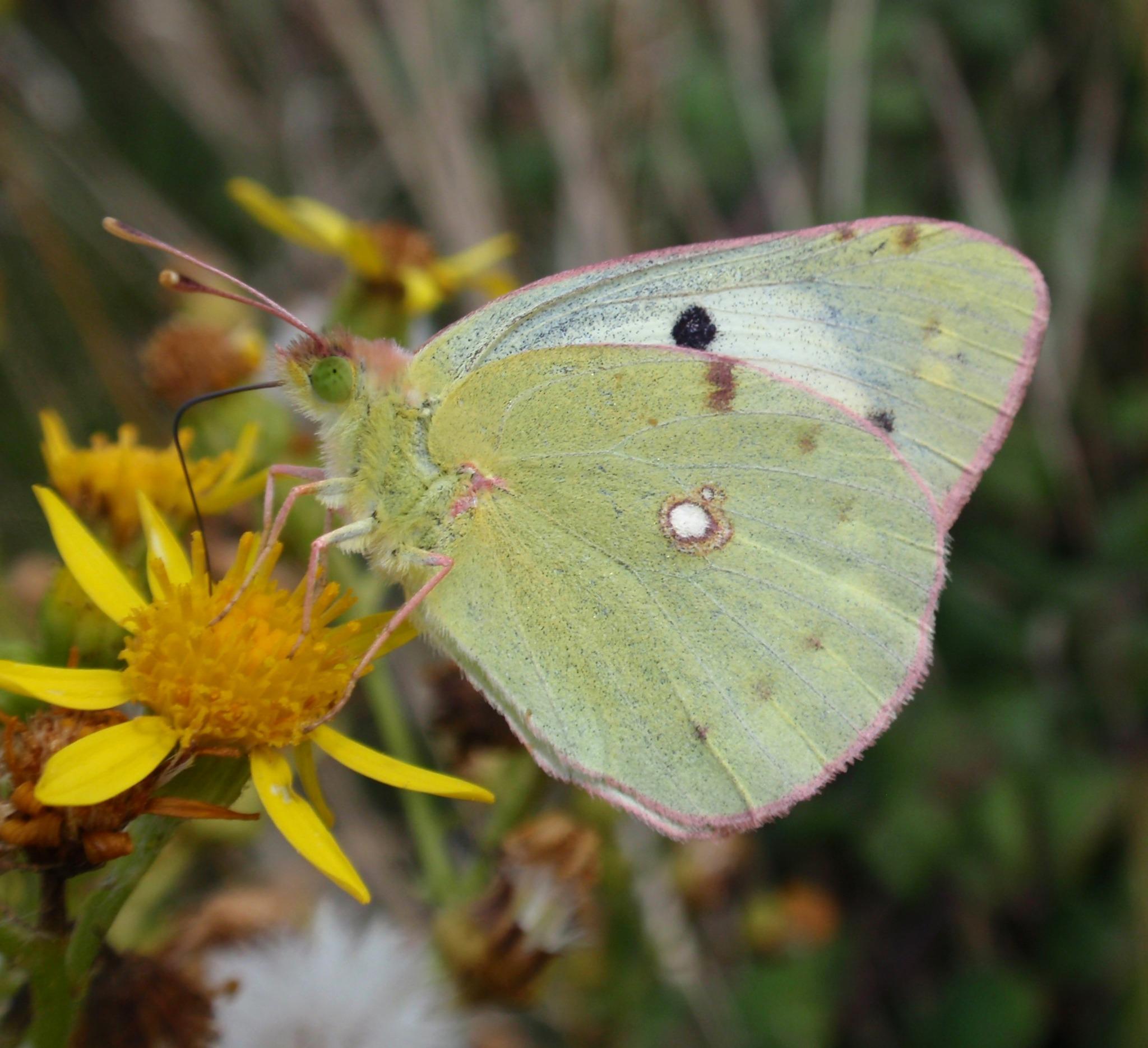 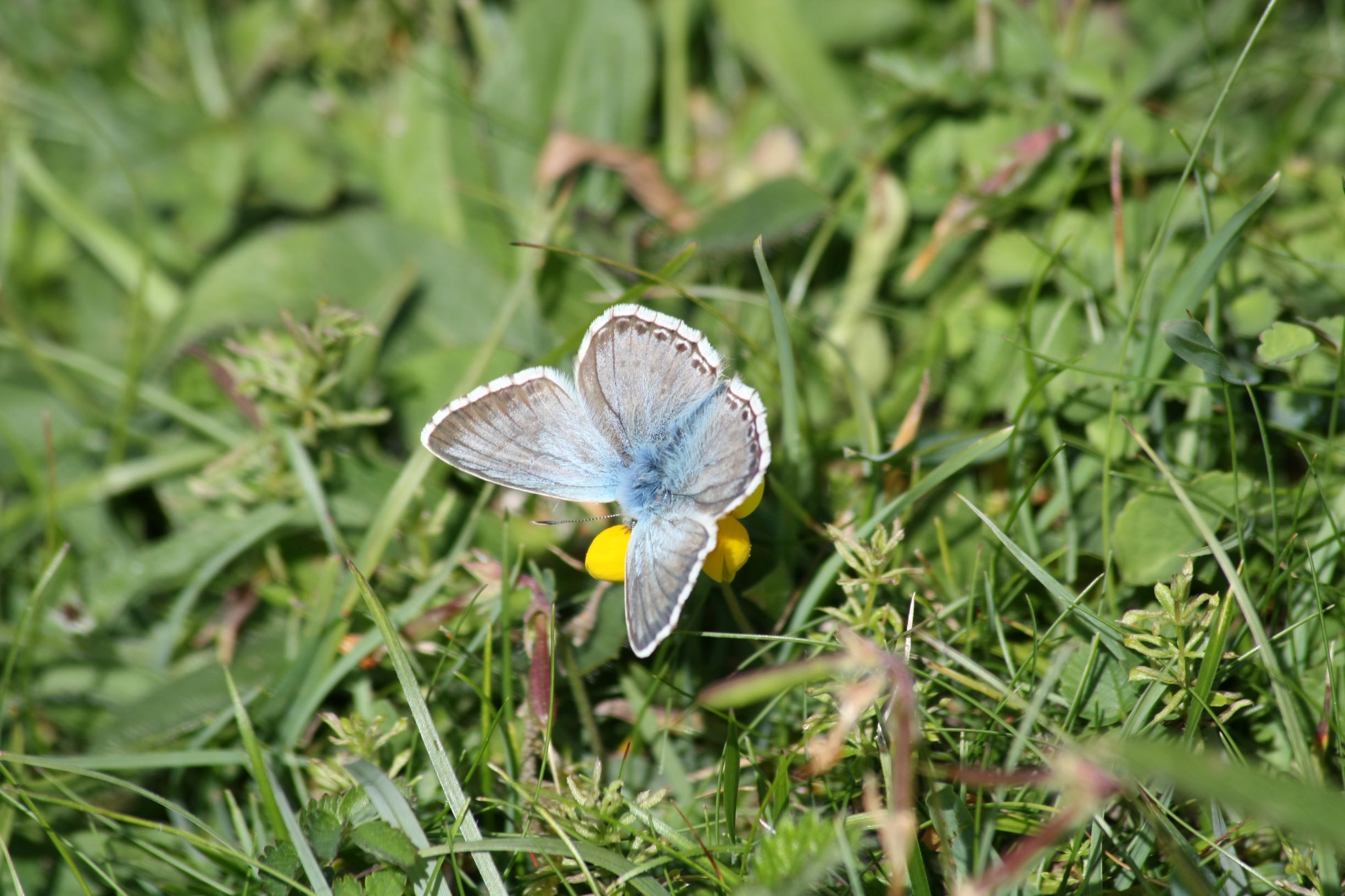 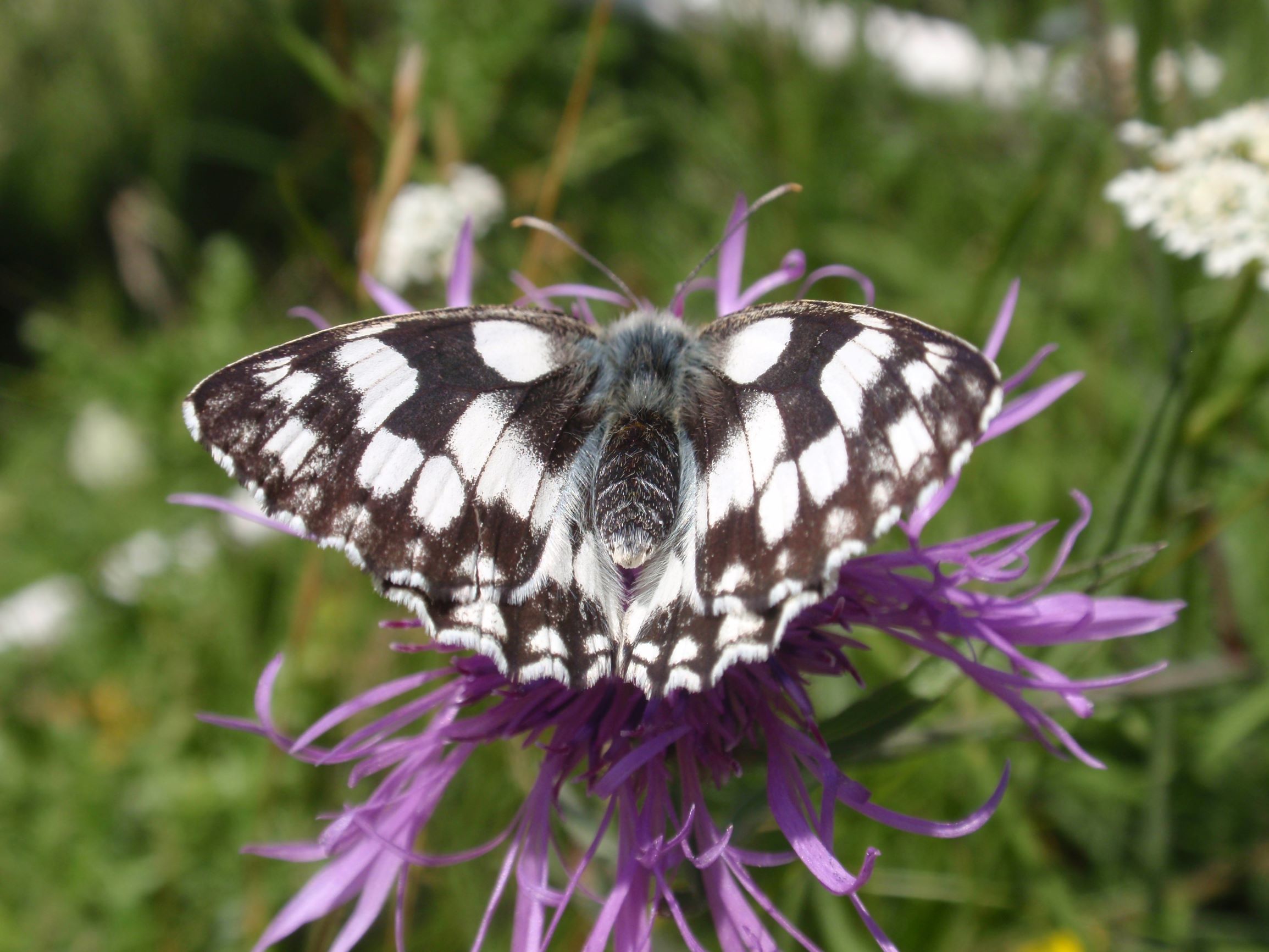 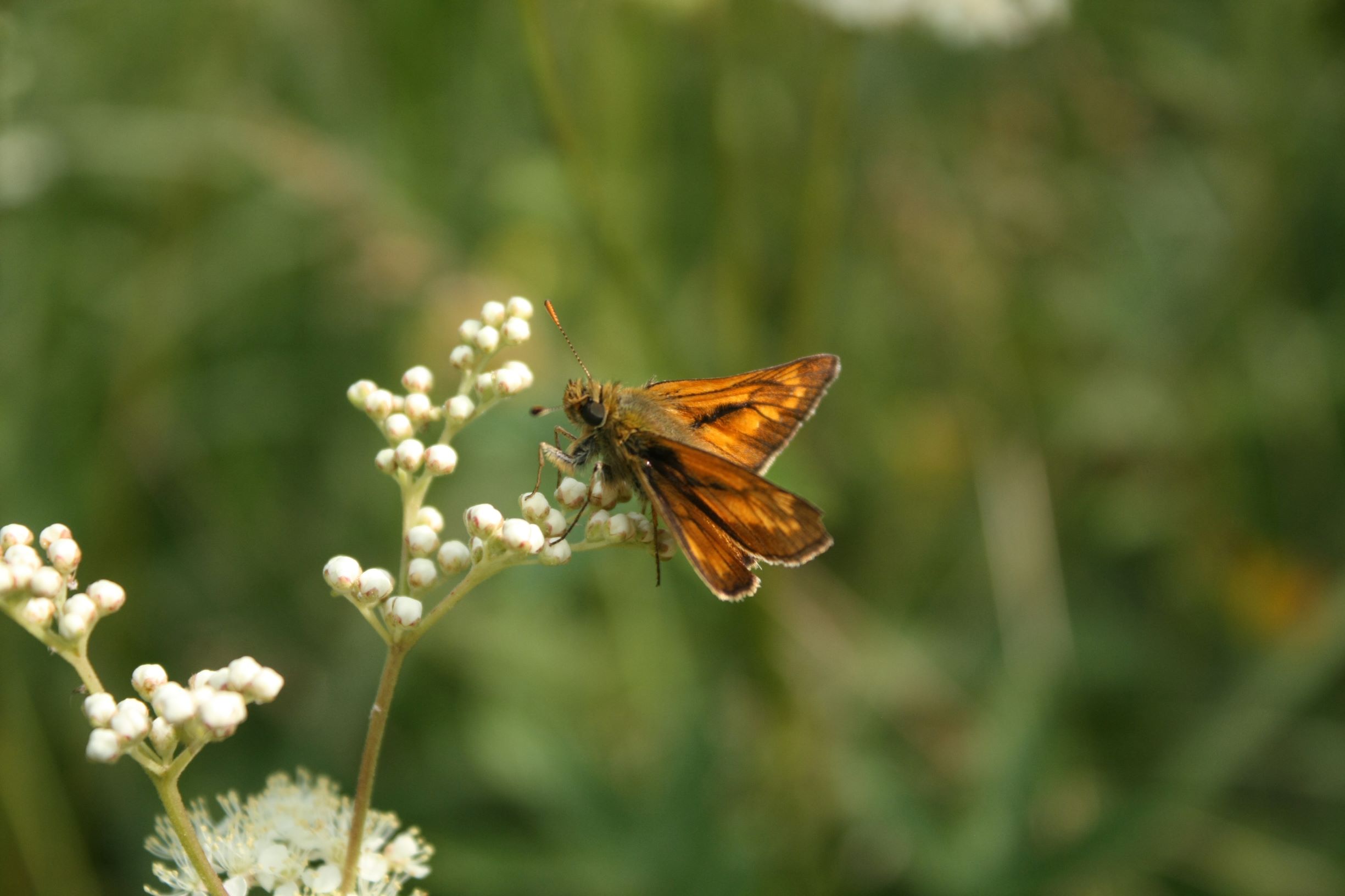 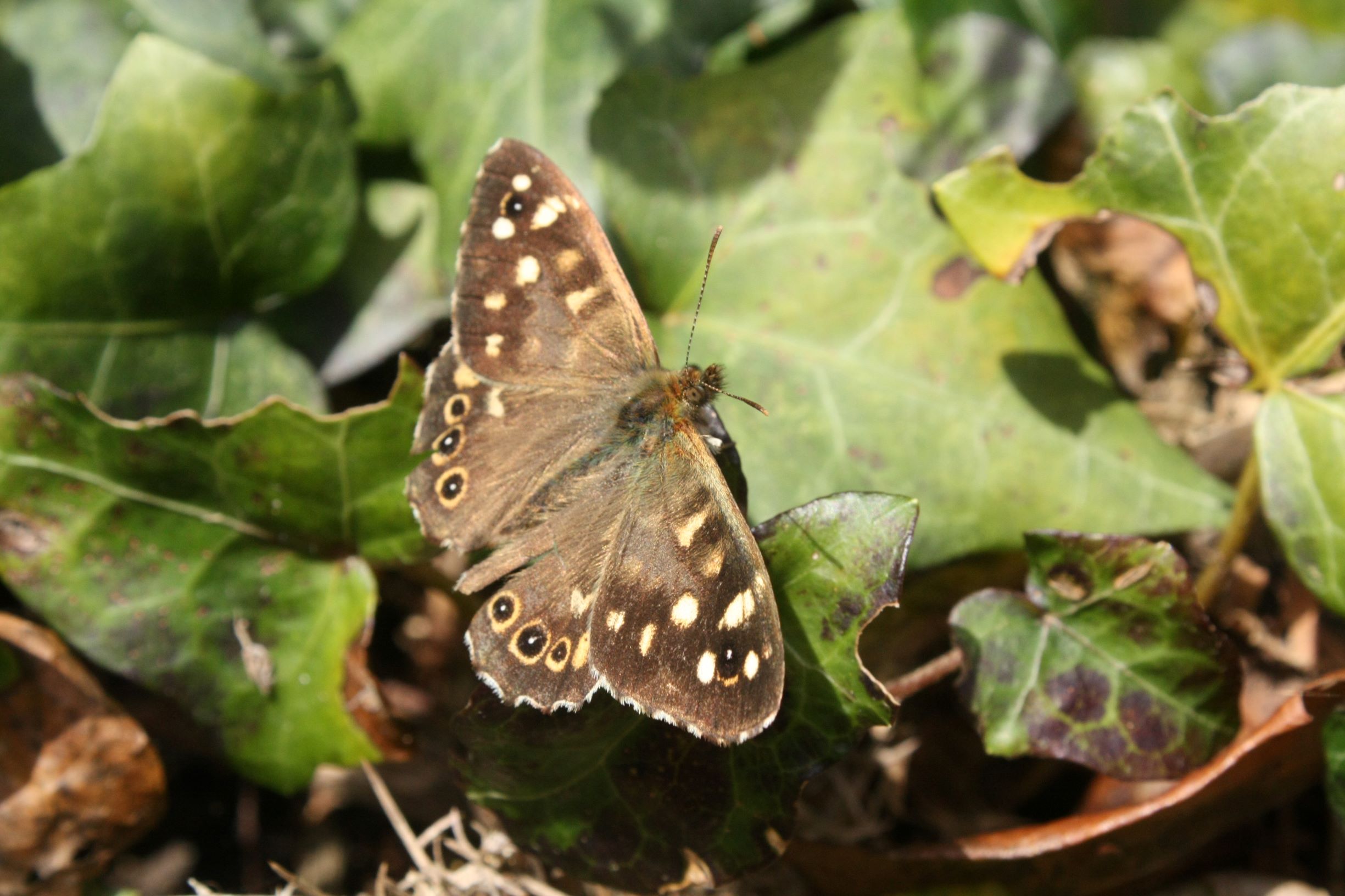 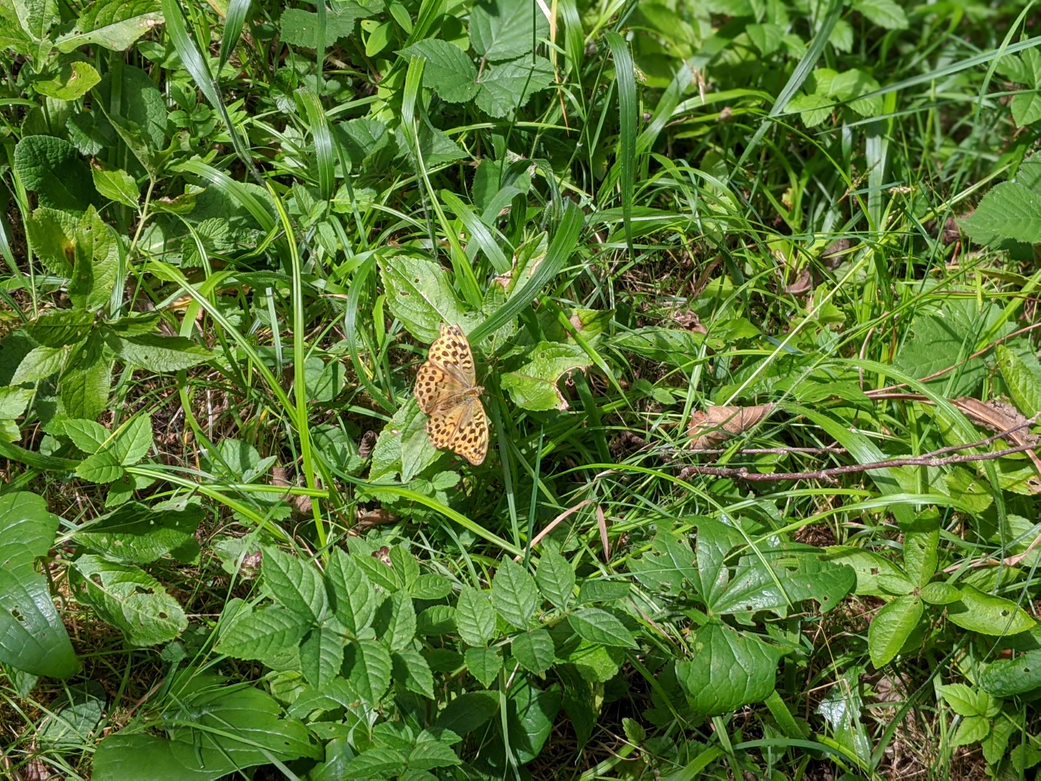 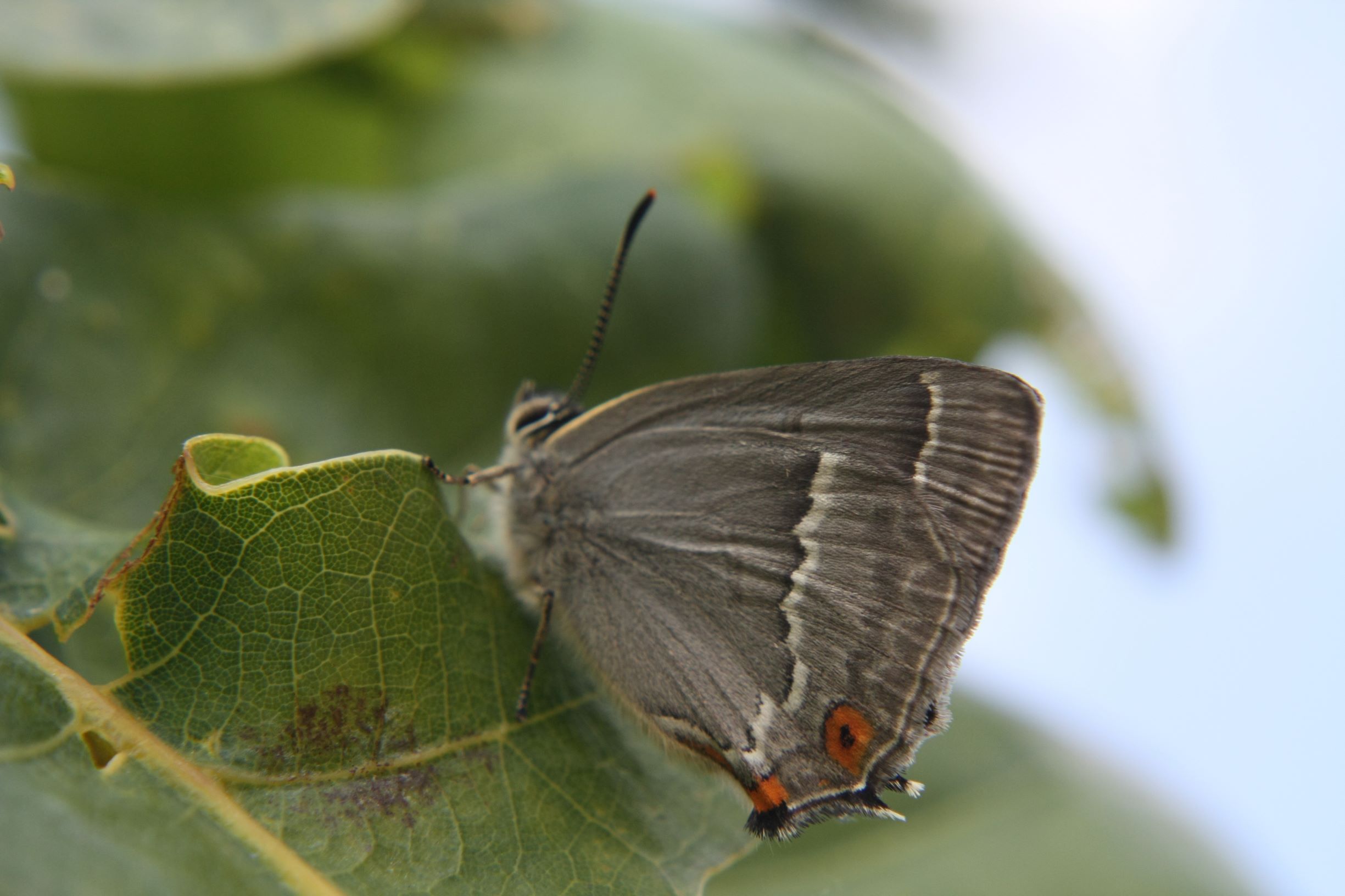