The Isle of Harty Trail and the Sheerness Way are flat, circular and perfect for families. They are mainly traffic-free but with some sections on road. At a moderate speed they can be completed comfortably in under an hour, depending on your fitness, but with young children it will take longer. Why not stop along the way to enjoy the local attractions or spend a whole day exploring the area.

Leysdown is a small but lively seaside resort, with a lovely sand and shell beach – perfect for families. At the beginning of the 20th century the American Wright Brothers, pioneers of early flight, made the Isle of Sheppey a focal point of British aviation. They commissioned the Short brothers, who had already set up a factory on land between Leysdown and Shellness, to build aeroplanes to fly at Eastchurch. Nearby Muswell Manor Inn was the headquarters for the early aviators and subsequently became the base for the Royal Aero Club of Great Britain. The first pilot’s licence was issued here. Today the Grade II listed building is a popular holiday centre.

Continue on to the Isle of Harty; once an island separated by up to a mile of water. Go inside the 900 year old Harty Church to admire the Flemish Kist (a 14th century wooden chest), carved with two jousting knights and brought in on one of these tides. Close by is The Ferry House Inn near to the Ferry Landing where, until 1947, a regular ferry crossed to the mainland. For unrivalled wildlife visit the internationally important Elmley Marshes adjoining the estuary.

Further inland stop at the RSPB ‘Raptor View Point’, a premier site for birds of prey and watch Marsh Harriers swooping over the reed beds between April and October.

Isle of Harty Trail: The Isle of Harty Trail is mostly off-road, the path is largely tarmac or concrete with sections of rolled gravel. When off-road do expect pot holes and small cracks. Routes go through working farms and so occasional farm traffic should be expected. Take care on the road.

Beaches tagsMinster LeasMinster's long stretch of sandy beach slopes down from a wide grassy bank and promenade, where you can flex your muscles on some of the… MinsterSave Minster Leas to favourites 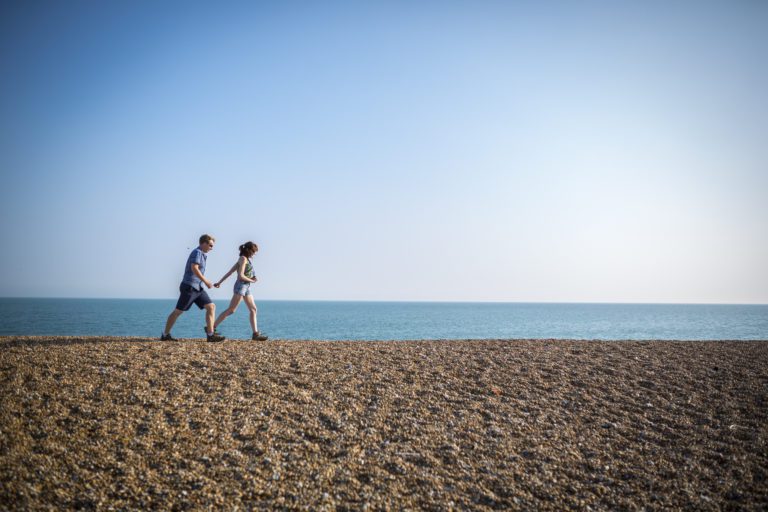 Beaches tagsSheerness BeachThis shingle beach is an ideal spot for picnicking families looking for an afternoon by the sea. SheernessSave Sheerness Beach to favourites